Over the years, earthcore has become one of the most popular festivals people venture to in the Summer. The humble beginnings of small-time bush doof have since evolved from hundreds of people to thousands. 24 years on,  earthcore boasts an impressive annual shindig, givign a stage to a wide range of eclectic dance music producers and DJs from all over the globe arts, as well as promoting a strong community vibe that sees the event growing in numbers each year.

We caught up with Spiro Boursine, the man behind it all, to talk all things earthcore, how it all began and what is has grown into! Oh, and also some crazy stories.

Dive into the interview below, and be sure to check the earthcore lineup right here.

Stoney Roads: Hey Spiro, thanks for taking some time out to chat to us! Big fans of earthcore and gotta pay homage to the original! Can you explain what was going through your mind opening up the gates to punters at the first ever earthcore?

Spiro: I really didn’t know what to expect. People just came and hit the dancefloor so I joined them 🙂

SR: Since then there have surely been some timeless earthcore memories, can you give us a run down of 3-5 of them?

S:
1. The doofnado hitting earthcore 2015 just up the hill from the Hydra floor and everyone running towards it and in it.
2. Dj Hell telling me to get off his house boat in 2000 millenium NYE earthcore because it was German Territory
3. Aphex Twin playing sunrise on the mainfloor with a blender, a mic and 1 turntable in 1996 or was it 1998 ?
4. Martin Solveig upon entering the event realising that he was in the bush at a doof and his shoes would get dirty if he stepped out so stayed in the car and refused to play and demanded to go back to Melbourne because the “bush” wasnt for him
5. Realising that Ive put on 36 earthcores over a 24 year period and still absolutely loving it
6. Perry Farrell from Janes Addiction cooking up the BBQ in my backyard after playing at earthcore in the mid 2000’s

SR: You’ve made the expansion into other states now with earthcore in the park! Why the move and what has been the response?

S: I thought it was a good idea at the time 🙂

SR: earthcore has a real focus on psytrance and has since day one, will this always be the case or have other genres started moving in?

S: We’ve had a focus on psy trance to a degree but our policy has always been forward thinking electronic music. Since day 1 there has been numerous genres played especially on the mainfloor. We have featured everything from Drum N Bass to Experimental and everything inbetween. The first international act I toured was Kevin Saunderson back at the start of the 90’s for example. Notable artists that have performed 1st at earthcore in Australia include James Holden, Aphex Twin, Phil Hartnoll, Perry Farrell, Vitalic and hundreds if not thousands more all non psy trance so yeah we have always been pretty mixed (up).

SR: Are there any other festivals overseas or locally that you respect and enjoy as much as earthcore? Why?

S: I respect Strawberry Fields because they’ve taken an original direction with their music format and designs much unlike the countless earthcore clones the scene is cluttered with today. As for overseas festivals nothing beats Exit festival in terms of logistics and organisation skills.

SR: Any advice for new promoters looking to throw their own parties or festivals?

S: Be prepared to lose everything but at the same time gain what you love doing.

earthcore will be taking place from November 23-27 in Pyalong, Victoria. Make sure you grab tix here before they run out! 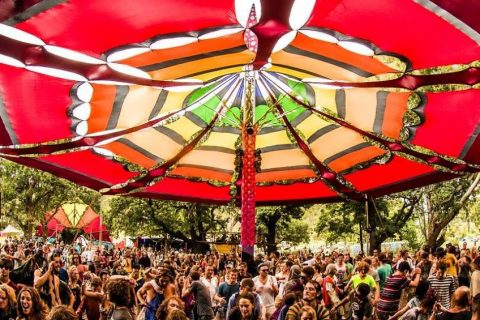