We’ve teamed up with Motorik synth superhero Frank Xavier, who also doubles as a Ableton Liveschool teacher by day for a series of history lessons on cool, quirky, peculiar and classic synths!

Expect a personal story, a bit of history, a couple streams, a MEGA review and of course a download of playable instruments you can plug into your Ableton as recorded by Frank and brother in crime, WAV-whizz Yama Indra (Gloves).

I have always believed that patience, some research and a little bit of luck is all you need to get started in life, and this day was no exception. I couldn’t have been more than 12 when I purchased my first synthesiser for a mere $150, which is enough to make any synth enthusiast sick to the stomach.

I would browse through pawnshops every Saturday, waiting patiently for old musos to sell off last memories of their glory days. This first synth I purchased happened to be a Roland SH101, and what a great synth to start off with. I had seen it before in a Devo video clip for my favourite song at the time called “Peek A Boo”.

I was obsessed with the synth solo sound, and needed to have it, I was convinced that this little keytar synth was the ticket and all it was going to cost me was my lawn mowing money, a fair price. At the time I didn’t realise how valuable this investment would turn out to be. Anyway here begins my contribution to Stoney Roads, a retrospective look at vintage synths and drum machines and I will even throw in a few free sounds, how’s that?

Released in 1982, the Roland SH101 was an attractive, affordable and portable option at US$500 a figure that is comparable to US$1200 today. You can still pick up these guys second hand for around the US$1200 mark, so their value hasn’t changed much over the past 30 years.

It’s monophonic, plastic, has only 32 keys and is battery powered which makes it very portable. I’m not going to lie, it looks like a hipsters wet dream coming in blue, red and grey, plus a rare white one out there, somewhere. It comes equipped with a shoulder strap and a small handgrip with a pitch bend wheel to rock this baby like a keytar. Hey I’ve done it before, it looks pretty boss actually. 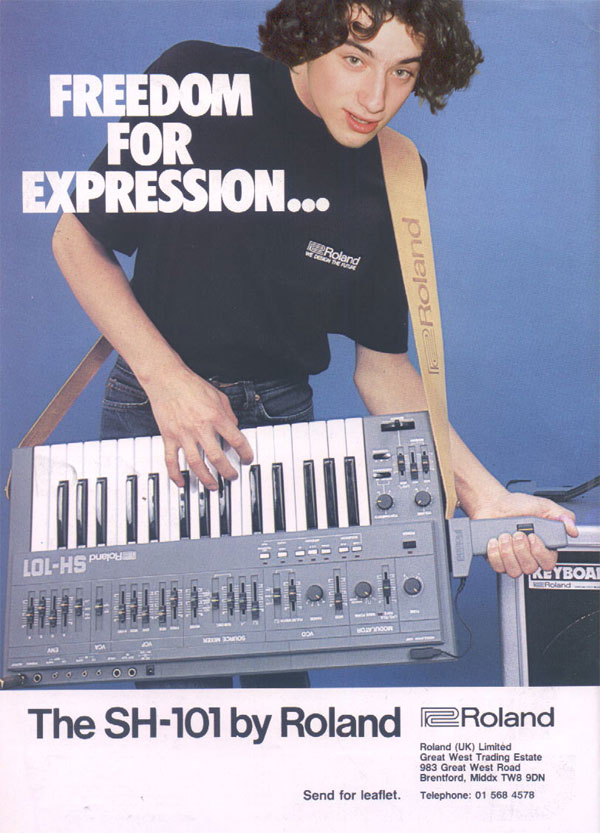 From here, I recommend you download this guy – the TAL baseline, its a virtual instrument of the 101. It is supposed to be a virtual model of the little guy and it would be a great reference while I go through the SH101’s layout, bear in mind the TAL is missing a few things, and also has a few hidden extras.

However, in my opinion neither of these synths sound like the Roland SH101, but that’s not a bad thing.

What makes this synth great for a beginner is that the signal path is laid from left to right on the front panel. This signal path is basically true to all analog subtractive synthesizers as a starting point, but don’t be fooled the SH101 does not sound like a beginners synth at all.

Starting with the overall tuning, it’s pretty stable and shouldn’t have any problems once it’s been calibrated with a chromatic tuner. Bypassing the modulator section for now, we will head to the Voltage Controlled Oscillator (VCO) block, which supports a single oscillator with a  4-step range (16’, 8’, 4’ and 2’). There are faders mixing 3 waveforms, a square/pulse with pulse modulation, a saw tooth and a sub oscillator on, the sub oscillator is switchable to a square 1 octave down, 2 octaves down and a pulse 2 octaves down. Its unique sound comes from the CEM3340 VCO Curtis chip. Roland decided not to use their own brand of chip for this one. Oh and did I mention it has a noise generator?

The signal is then flowing into the Voltage Controlled Filter (VCF) Block. This is a self-oscillating lowpass filter on Roland’s rare IR3109 filter chip, my favourite filter chip, which can then be controlled by an envelope, or by modulation, or by keyboard tracking. 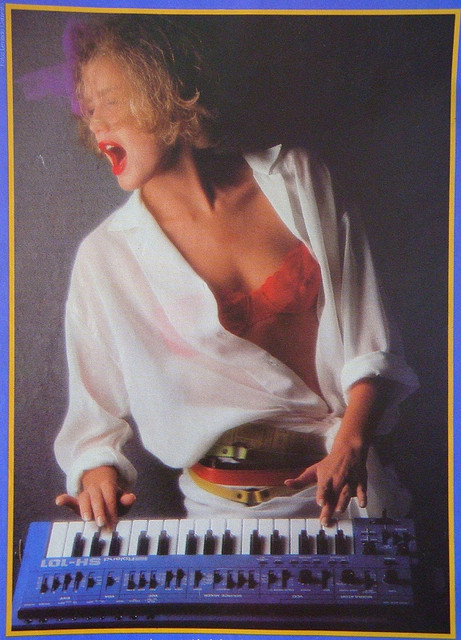 So now lets go back to modulator block, which I mentioned at the beginning. Our VCO and VCF can be manipulated with this modulation which consists of a rate generated by an oscillator at a low frequency (LFO), this rate also doubles as a clock rate which I will come back to. This LFO offers a few shapes, being a sawtooth, a square, a random generator, or noise.

We now head to our last stage, the Voltage Controlled Amplifier (VCA) Block, a rare BA662 chip controlled by gates and a 4 stage Envelope (ADSR).

Now lets do something with it. Personally I think the SH101s strength lies in its inbuilt 100 step transposable sequencer. Record in a few notes and control the tempo of the sequencer from the LFO/Clock Rate I mentioned before, or you’ll find the EXT CLK jack input useful for this when integrating with other machines.

The SH101 also has an arpeggiator function for the simple minded, arpeggiating up or down or up and down. Other controllers include a bender for live manipulation of the VCO, VCF and LFO amount. There is also a portamento/glide function for smooth pitch transitions.

Finally we come to the question, how do I play this thing? It doesn’t have a USB port or even MIDI? Okay you got me, it is controlled by Voltages and off and on signals called gates. If you look up top we have inputs labeled “CV in” and “Gate In”. Basically “CV in” tells the SH101 what key to press and “Gate in” tells him when to turn a note on or off and for how long. 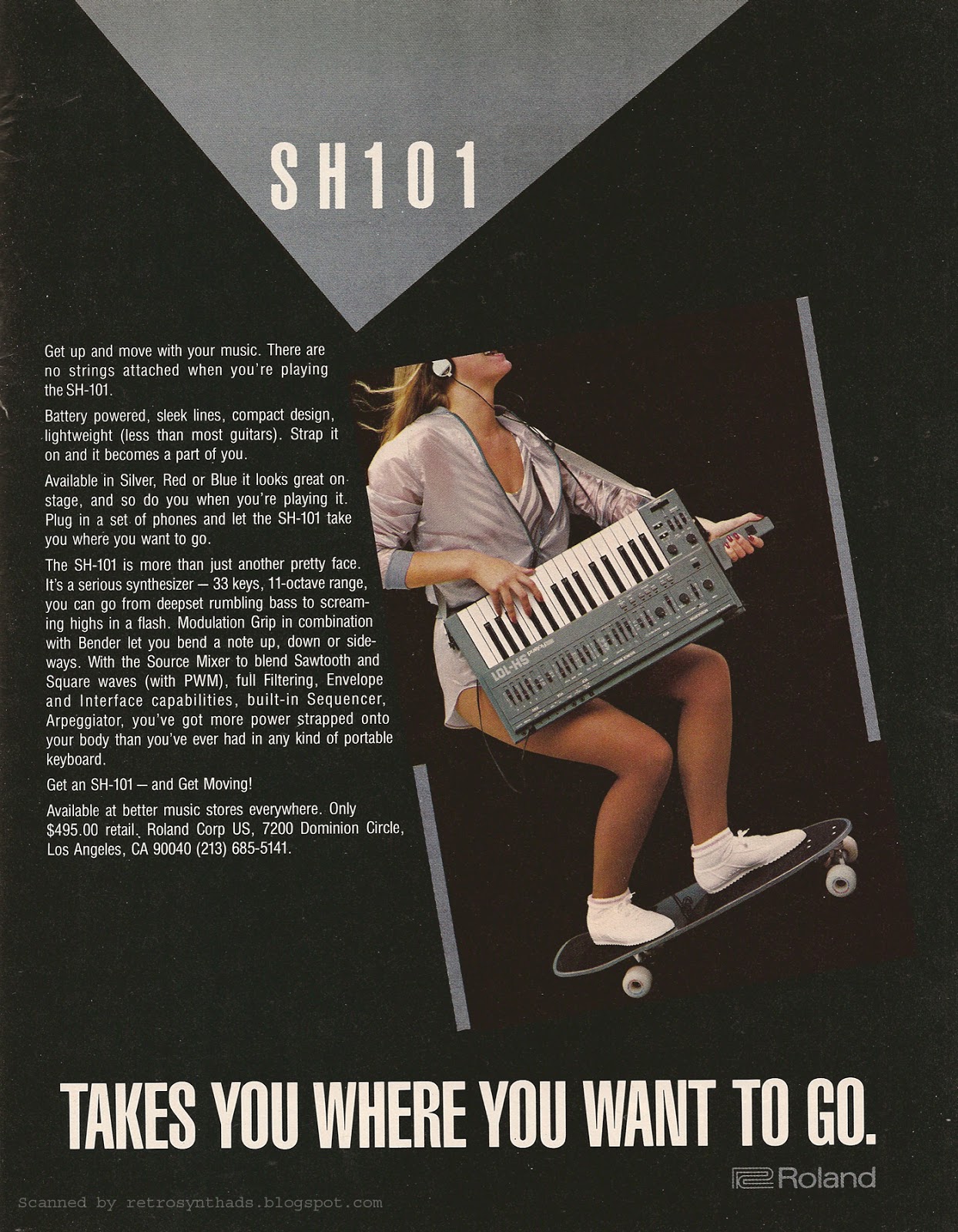 To integrate this primitive technology you need a device that converts the midi data from your sequencer to control voltages, its pretty simple really. The CV and gate out sends voltages out of the SH101’s key presses or sequencer.

Just about every electronic producer in the 90s used the Roland SH101 as it was the raver’s choice, and of late they have been popping up in a lot of new productions across every genre.

To label this underdog just a bass machine does not do it justice. I have other machines that can handle this role, but I think it excels in acid squelch type sounds using the filter envelope, and modulating the VCO to create fat sounds. I love its bleeps using the LFO on random and it’s great for simple melodies through a delay pedal. However, coming up with random sequencers and having them triggered at will and pairing this with real time tweakability allows you to explore endless possibilities.

The Roland SH101 is my favourite monophonic synth, I think it looks great, it has a very unique sound compared to the rest of the SH Roland series and it’s in a class of its own. I learnt a lot about synthesis from the SH101’s simple layout and it is really easy to use, you don’t need an engineering degree to get a great sound out of it.

If you can get your hands on one of these babies you definitely should – as it will teach the basics of synthesis without too much struggle. If you can’t find one of the original units, you may want to consider the recently released the SH-101 Plug Out – a software add-on to replicate the SH-101 that comes free with Roland’s new System-1 unit. However, delving any deeper might require some guidance, and for that I highly recommend Ableton Liveschool here in Sydney, who offer a great course on synthesis and sound design to take your knowledge to the next level.

Now for the best bit, a free download of the samples with 11 playable instruments in raw wavforms. Do it!