French electro duo Justice has celebrated the 15th anniversary of their debut album by sharing the original demo of their 2007 breakout track “D.A.N.C.E.”

The track and ‘†’ album was for many a pivotal moment that led to the astronomical rise of electronic music globally. Taking what was really some bedroom DJs around the world and setting the scene alight.

Talking about the album, one-half of the duo Xavier de Rosnay said;

“Asking people for 45 minutes of their attention when listening to a record is a big demand, so when we make an album we start with a plan regarding all of the phases it should go through. Then we write the songs to fit that plan. Instrumental music can quickly become boring – even to us as the music makers – so our main objective is to entertain ourselves throughout the more than one year that we spend in the studio, as well as to entertain the people who we want to spend 45 or 50 minutes listening to our record.” adding “In the case of our first album, we intended to make a disco opera. Disco blends elements of classical and baroque music with danceable rhythms – it blends the sophisticated and the fun with a straightforward beat, and the 12 tracks on Cross all have elements of this. The shape changes from track to track, but they’re all variations on the same theme. After writing the material, we’d constantly make adjustments so that, even if there were huge stylistic gaps between the individual tracks, everything still flowed.”

The demo shines a light on the bare bones of the track and the simplistic slappy sounds the pair used to conceive the track before it become an electro monster. Even funkier than you’d imagine!

It isn’t alone with the EP boasting all the singles and remixes to date including rerubs from Stuart Price, MSTRKRFT and the super lush Alan Braxe & Fred Falke take.

Check the tracklisting below and stream below that. 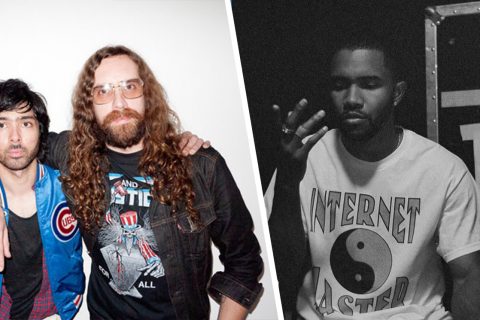