Electronic duo from Melbourne, Two Can, are back again with yet another upbeat, catchy single “Outta Here,” cementing them yet again as a multi-instrumental, composition powerhouse.

Complete with live instruments, “Outta Here” showcases Two Can’s ability to consistantly produce rhythmic sing-along anthems. The release acts as a dual celebration – of good music and also Two Can’s victorious signing to  American Booking Agency, Circle Talent. We sat down with the boys to share the celebration and more…

S.R: What was the process like finding an American Booking Agency?

T.C: We’ve been eyeing the US & Canada for sometime, and now that we have the live show set up we felt the time was right to start putting those plans into place! We looked into a few agencies and Circle Talent was one of the top ones, the opportunity came about through our manager Tobias who had a connect with our legend of an agent Chad who presented us to the rest of the team at Circle Talent. They were into the music and believe in what we’re doing, which is the most important thing to us.

S.R: How did it feel when you found out?

T.C: It was an amazing feeling, and to be on a roster that includes acts such as San Holo, Just A Gent, Kilter and Elohim. Its very comforting knowing you have people around you who support your music as much as you do. We’re super happy for them to join the Two Can booking team which also includes our agents Kosher for Australia & NZ. It’s extremely advantageous having different opinions on certain things as well as and getting different idea’s from multiple perspectives. When we found out though we were ecstatic, our team had be talking to them for a while but for us it happened really quite quickly. Within one week we were CC’d on our first email with him and by the end of the week we were on the phone with him discussing plans.

S.R:When do you think you’ll be heading to the states? and which festival is on the top of your wish list to perform at?

T.C:We’re aiming to head over this year, but it’s to early to say any exact dates just yet, we’re looking at a few options and we want it to be special for the fans! On our festivals wishlist we hope to one day get a chance to play at the likes of Pitchfork, Panorma, FYF, Bonnaroo and of course Coachella!

S.R:What was the writing process like for Outta Here?

T.C:Most of our songs start with a chord progression. We then add drums, and try to incorporate the melodic elements around the groove of the drums. Melodically we use a lot of live instruments in our productions such as guitars, vibraphone, vocal manipulation by recording our voice into our sound card and processing it to sound the way we want it to.

With Outta Here specifically, we finished a backing track and ended up sending it over to Josh Hardy aka ‘Hopium’ as we loved his voice and had remixed his song “Dreamers” a while back and it went to top of the Hype Machine charts. After a bit of back and fourth we got the vocal to a stage we were really happy with and brought it back to the project to then workshop up some more.

S.R: Do you have any collaborations on the pipeline?
T.C: We’ve never really done an traditional collabs with other producers but been working on some big remixes and with some really talented vocalists on some new tracks which we are finishing up! We’re always looking for more great vocalists (if thats you hit us up!).

S.R:Where do you see yourselves a year from now?
T.C: Taking our music around the globe has been a dream for us as long as we can remember. In the next 12 months we’d love to see ourselves as an emerging household name with a US tour under our belt as some key support shows both in Australia & overseas.  We’ll also have a few new records under our belt and have hopefully found a great partner. We both aspire to be a successful touring live act, perhaps along the lines of Disclosure or Two Door Cinema Club.

S.R: What instruments do you record your music in and how do you manipulate them?
T. C: We use a handful of instruments in our productions. We generally try to incorporate one instrument per song as we think giving our music the element of live performance and the feel of imperfection is really important. Guitar is a big go too, we usually get the bed of the chords down, and then riff over the top and find a lick that we like, put that lick on the Ableton Simpler and play it up the keyboard and add notes on top of the riff to expand it more into a melody rather than just a little shred! In the past we have recorded our voices, a vibraphone, saxophone, trumpet and even the rainstick. I think in this department there is no right or wrong, so go to town on adding what ever sounds / instruments you see fit. 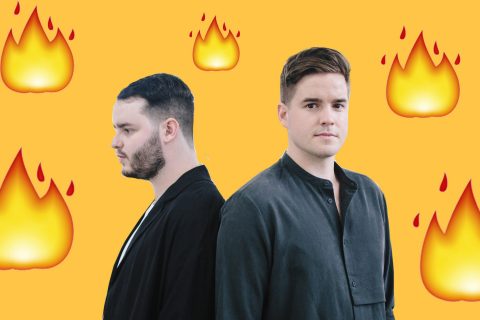