Holy dooley! Armand Van Helden and A-Trak’s little project Duck Sauce have dropped a fresh load of tracks on their latest EP. Entitled ‘Duck Droppings’, the EP is now available for stream via their SoundCloud.

Look, there aren’t too many surprises with this one. Like a literal ‘duck sauce’ there is a procedure or recipe that is often followed in making these beats. The formula that Van Helden and A-Trak instil for their mega commercial hits is pretty straight forward – disco sample, funky guitar, vocal hook, hi-hats, repeat, repeat, repeat. Duck Sauce has thus become synonymous with disco housey jams that loop samples from old-school funk/soul/disco gems to mixed effect. The result often varies from a giddy sense of euphoria and excitement that causes you to cut sick no matter how many times you’ve heard it (for instance ‘aNYway’), to initial enjoyment on first listen, that is subsequently followed by extreme frustration, boredom and annoyance every time you hear one of the overkill repetitive samples (for instance ‘Radio Stereo’). After a couple of listens it is apparent that the four track ‘Duck Droppings’ can be neatly divided into these two categories.

The first half, featuring tracks ‘Party In Me’ and ‘Louie The First’ are fun packed disco jams that are guaranteed to get the people grooving and are more than just gimmicky tracks that take a sample and mindlessly loop it. ‘Party In Me’ is a true standout. Excellent harmonisation, build-ups and break downs make this a disco winner that keeps you bopping along for the whole ride and is worthy of back to back listens. ‘Louie The First’ somewhat blurs the lines between the two distinct categories – but if you’re a fan of Louis C.K’s hit HBO television ‘Louie’, as I am, then you’re going to love this one. It is foreseeably annoying and the novelty may wear off, but for the time being we’ll let it slide – absolute ripper of a sample from a ripper show!

Then there’s the disappointing back-end of the EP that is made up of tracks ‘Calamari (Put The Sauce On It)‘ and ‘Mondo’. ‘Mondo’ has been floating around for a few years now, with a couple of notable DJ’s dropping it in their sets all the way back in 2011, previously under the name of ‘Mandolay’. But it never gained any traction, so not quite sure why they’d bother rehashing this one. ‘Calamari’ on the other hand is a fresh single – yet doesn’t have the same delicious, rubbery, greasy goodness that one expects from the delicacy of which the track is named. Not sure where this sample was ‘sauced’ from, yet it simply evokes memories of late nights in one of Newtown’s seedier Kebab-eries and Tetris. The ‘Put The Sauce On It’ hook is cheesy and doesn’t enhance the track or make it memorable/enjoyable, unlike ‘Barbara Streisand’ or ‘Big Bad Wolf’. In hindsight ‘Duck Droppings’ may be more than just a witty little laugh out loud title – half of the EP stinks and the toilet paper artwork is illustrative that the duo have simply wiped their asses and pulled out these beats. Moreover, it could be that these are merely the leftovers or B-sides that they’ve ‘dropped’ from their debut album ‘Quack’ which is slated for a release later this year.

There’s no denying the individual talents of either of these producers/DJ’s. Nor can we deny their work as a team. It’s just a little disappointing when two maestro’s get together and release fairly unimaginative work. We’ve seen what they’re capable of and that’s what makes it all the more frustrating. This EP has been in the works for a while  – so still uncertain why they’d release a track that has been floating around for a few years (despite no official release) and one that downright is unpleasant to listen to.

We’ll take the good with the bad. ‘Party In Me’ has some serious commercial potential and will get a lot of spins in our office. Despite the let downs, we’re still hoping for these dudes to come back to Aus real soon, because as DJ’s they’re two of the best, and judging by their Essential Mix the duo’s track selection is all time. AND we’ll be sitting tight for release of their first official album ‘Quack’ which is slated for a 2014 release.

Check out the EP below. 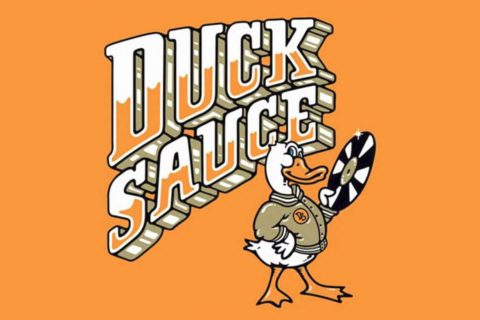