Alan Braxe pee’s on wall, gets kicked out…. Denies it!

Alan Braxe has purportedly been kicked out of a gig at DNA Lounge for urinating on a curtain behind the DJ booth.

Although we’d sometimes go as far as saying Alan may in fact be ‘pissing gold’ for his constant array of impressive originals and remixes, this goes a step further in what would be considered a strange event for the always smiling French-House veteran.

A comment from the venue was posted on the DNA Lounge site;

Turns out that our headlining DJ last night, Alan Braxe, has a bladder control problem. That’s the generous explanation for why he decided, in the middle of his DJ set, to turn around and piss on our back-wall curtain instead of using the restroom which is twenty feet away.

After his set, when we had tossed him out, he was aghast that we chose not to let him back in. We said that we’d be happy to let him in if he paid us what it was going to cost to have the curtain cleaned. He declined. Also he threatened to sue us. “For what?” I inquired. “Because I wouldn’t come out and talk to him,” Barry tells me.

Well, good luck with that.

Alan Braxe’s management have struck back stating that “this is a complete fabrication of the truth and Alain in no way urinated on any curtain or wall. This is a personal attack on Alain and something we will be taking very seriously indeed.”.

Obviously the owner of the venue would be angry at the situation but seems overly ‘knee-jerk’ in a world where top DJs and rock stars end up in much more incriminating and hostile situations. 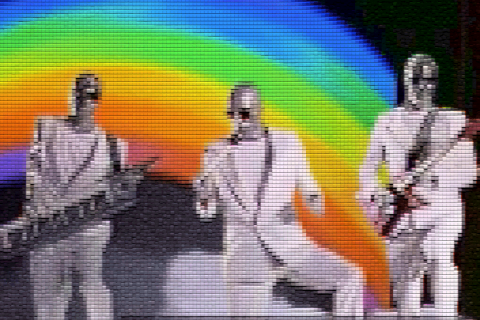 After 20-years, dance legends Stardust are working on new music!

Man Dies On Opening Night Of ‘The Warehouse Project’ In Manchester

Watch: Alan Braxe and Joakim in the MixMag DJ Lab