It’s rare to experience a festival that feels both completely fresh and all too familiar at the exact same time. Subsonic is one of those very rare experiences.

While I had gone along last year, and felt that I’d seen all there was to see and do, I knew going back in 2017 that things were going to be completely different. While yes, the setup of the festival – the stage locations, swimming spots and campsites (both in location and name [charmingly named after some of Sydney’s most highly and least sought after suburbs]) – was the same, it was the little things that stood out to me immediately.

Each stage felt fresh. From the cooling waters and jungle vibes of the River, the grand scale and monstrous Funktion Ones of the Main Stage, the club like setup of the Pizza Lab (which actually makes really good pizzas by the way – I spent the second day waiting for one for what felt like hours but was probably just an accurate representation of my mental state), the twisted sights and sounds of El Stompo, and the dazzling decoration of Paradiso. Jumping between these never really felt like a chore either. While yes the River was very far away from everywhere else, there was enough art, smaller stages, shops (selling some really cooked festival gear and some pretty reasonable food) and excellent people watching to help enjoy the ride.

Also, special mention to the crowd. Bush doofs have a reputation for housing some pretty strange individuals, but Subsonic has to take the cake. The amount of effort that people would go to both in their costuming and in their level of bent was remarkable. My friend had a dance with C3PO, I saw dudes leading eachother through the crowd by a leash, a woman commanded the crowd in one of the most elaborate dragon costumes I wager to have ever existed, and there were was one of the highest concentrations of semi and fully naked people I’ve ever seen.

Festivals like Subsonic foster this feeling of acceptance and open-ness that all events should strive for. While yes, I’m sure that there would have been some instances of people being inappropriate, rude and piggish, I think the fact that people were so ready to get their kit off and interact with everyone in such a lovely way is testament to the kind of people that enjoy this kind of music (for the most part). Dance music is about enjoying yourself, and any event that doesn’t promote the idea that anyone can enjoy themselves openly and without fear of being persecuted or to be made comfortable in any way isn’t one that I want to be supporting.

While Subsonic has been going for a number of years now, I noticed that the lineup this year wasn’t as stacked with internationals as it had been previously. Last year boasted acts like Seth Troxler, Ben UFO and Honey Dijon, while this year had a much stronger focus on smaller international and local talent. Some of my favourite sets happened to be from locals I see all the time, special shoutout goes to Andy Garvey and Ben Fester who both killed it at the River on opening night. Mr. G, Pearson Sound and Boris (which would’ve been x 2 if Boris Brechja hadn’t stayed home sick [so devastating]) also killed it. Pearson Sound (formerly Ramadanman) played one of the most interesting and diverse sets I’d ever seen at Subsonic, a perfect closer.

While I know this isn’t something I need to say, as I’m sure just about everyone that would be reading this shares a similar opinion – cops don’t need to be at events like this. It’s all been said before, but there was one moment in particular where I realised this more than any other time at a festival.  Last year NSW Police put out a special report explaining just how disappointed they were in the drug presence at Subsonic and that they would be ramping up searches in the year to follow. When I arrived there on Friday I could tell from the onsite that cops were fighting a losing a battle and arresting the wrong people – users rather than dealers. There were tonnes and tonnes of dogs inside the festival gates too, walking around at all hours of the night and scaring the fuck out of people. Every time you’d walk down the main strip towards dogs, legit everyone walking in the other direction would tell you that there were pooches up ahead. It was kind of nice, everyone was really looking out for each other, but why on earth do we have to?

I mentioned that there was a moment that made me realise how over the top the police presence is at dance music festivals. It happened on the Sunday night, when a number of my friends and I were leaving the festival for the last time and headed to our campsite. Just as we passed the security checkpoint, we saw this dude running full pelt towards us giggling in the most high-pitched tone of voice. As he got closer we realised that he was completely naked, dick flailing in the wind. As he ran past we turned and saw the security guards tackle him to the ground in the most brutal way, around 3 absolutely monstrous guys putting their whole bodies on top of him. Behind him, by just a few meters, was another guy running with all of his clothes in hand, and immediately stopping and kindly asking that the security guards be a bit more gentle with him. I’d seen people like this (no, not naked – though plenty of those) around over the course of the weekend. They were shirts with ‘Crowd Carer’ written on the back, and belonged to a group called Dancewize. They had a tent where you could stop by if you felt uncomfortable or maybe if you felt like you’d had too much or just needed someone to talk to, and every so often they’d come passed people’s campsites just to say hey and check in. It was so genuine. So, to see one of these Dancewize members running behind this naked dude, carrying his clothes, I imagined the situation that would have preceded him getting tackled. Would a cop with a dog have been so caring? I don’t want to generalize, but I personally think we need more Dancewize at the gigs we go to. 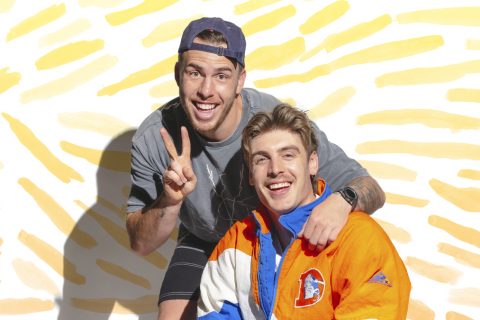 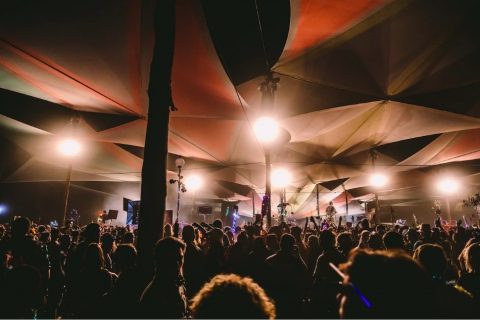 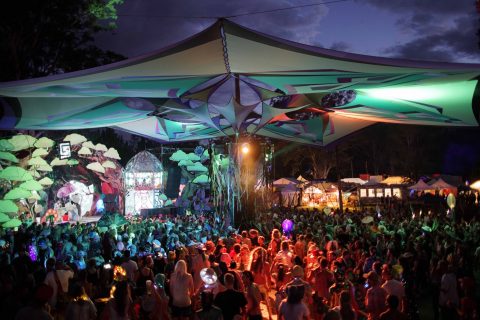