Talking Darkwave With The Dutchess Herself, ABRA

Self proclaimed Darkwave Dutchess Abra had a chat with us before taking off on her second international tour with her new EP Princess on the way.

Hailing from the deep south US, Atlanta, Georgia, the young artist has carefully crafted a unique sound combining heavy bass lines and sensual lyrics. She started off making youtube acoustic cover videos and a little later got inducted into the Awful Records rap crew.

Gaining international recognition Abra was listed in Dazed Mag “100 People Shaping Culture in 2016” and played the infamous Berghain back in March.

SR: Are you getting ready to get on tour soon?

SR: Is this tour for your upcoming EP Princess?

A: Kind of. The Ep is not going to be released the 15th so I’m starting a little early. It’s not necessarily a Princess tour but I will probably be performing some of the songs.

SR: And the 15th you will be performing in London?

A: I have the best turn out in London. It’s going to be a really exciting night. London back in March was my first sold out show I ever played. So I’m really excited to go there the day I drop the project.

SR: Is there a big scene for dark wave music in London?

A: I think there is. I don’t really know how to classify my genre but I do feel like people out there are really into the fusion of RnB and electronic music. I think that’s why it does well. The upcoming London show is sold out already and it’s over twice the capacity of the venue I played last year.

SR: What is your favorite part of going on tour?

A: With my first international tour in March, seeing people who live so far away from me listening to my music, knowing all the words, seeing how many people turned out, saying to their friends “this is my song, girl” and hearing what people said after the show.  All of the work validation is from the internet. To see it materialize, the people who come up to the show are people who really get down with you. It’s one thing to share someone’s link, like someone’s tweet or support them through the internet but it’s a complete other thing to be buying tickets to someone’s show.

A soundcloud artist like me, “Oh 4 thousand people listened to this song that’s cool” but to see what that looks like in real life is kind of a mind fuck.

SR: How much of the Princess EP did you do by yourself?

A: I wrote it all, produced it all, and recorded it all.

SR: You lyrics and aesthetic have a dark femininity to them. Are you making a statement on femininity or is that just how you are?

A: Thats tight, I’m glad thats coming across. I wouldn’t say its a statement on femininity at all. Men and women are different but people in general exist on a spectrum so some girls don’t feel that way.  I think I am making more of a comment on human vulnerability. I have guy friends who are going through the same shit, where they are like “Oh my gosh this person is playing me for a fool, hurting my feelings, calling me sensitive” anyone can be vulnerable.

SR: Does being around the Awful Records crew keep you motivated?

A: Yeah if for no other reason we are all trying to make it, but there is also some competition like “damn, they just put out a fire album, I got to put out something fire too!” No one wants to get one upped. But I’m definitely trying to see everyone in Awful make it.

It just inspires me to work hard. I don’t get complacent or lazy because I have 15/16 other people I am trying to make proud. We don’t want the movement to be a flop. I have seen a lot of people be a part of a collective and only one person succeeds and they don’t care about anyone else coming up, everyone else is just riding the coattails and not getting to shine and I don’t want Awful records to be like that.

SR: How did you get into the Awful records crew?

A: Father definitely was stalking my youtube videos for a second haha. He was coming to my shows and lurking in the dark corners and finally he was like “look, I’ve been watching you for a while, come be a part of this” and I couldn’t really deny his path and what he was trying to do. It was really authentic and based on something positive. Lets work, lets make something out of ourselves, he gave me some direction and a context to exist in.

SR: Is there a vision for Awful Records?

I didn’t really know how true that was till Carti did some stuff with ASAP and everyone thought there was going to be beef between us and I was like, no, I want to see you prosper, if you get offered a really good record deal you should take it. It’s not about our crew being this or that, it’s just giving everyone a platform to be heard.

SR: Does your music help you work through tough shit in your life?

A: On a basic level making money from the pain always helps haha.

I’m a very analytical person, so I’m always going over situations in my head over and over again trying to figure it out. That’s how you can get over mostly anything if you can see why. Like in scary movies, once you see the face of the bad guy all the sudden it’s not scary anymore. If you demystify problems you can solve them or get over them.

When I am writing songs that’s me trying to analyse where I stand, who I am, who that person was. It helps give me a better understanding of the situation. And If I can understand it, it doesn’t hurt so much.

SR: If you could go back and say something to yourself when you were making youtube cover videos what would you say?

A: I would definitely tell myself to have way more confidence. I would put myself down a lot and not only is that not good for my own mentality but it’s also like if you don’t fuck with you, why would anyone else? You know yourself better than anyone else and you have to sell yourself.  I wasn’t getting anything done because I was just sitting there thinking about all my negative traits, things I wasn’t good at, I wasted so much time.

Have more confidence, be on your shit, get work done, stop sitting waiting for something to fall into your lap.

SR: How has Atlanta influenced your sound?

A: I’ve never tried to make music anywhere else. I didn’t really go out to shows here but all the songs on the radio, hella bass, and I didn’t realize how much I liked bass until I started listening to the music out here. Its really important, you can hear a song and it can be real wack for the first 15 seconds then the 808 comes and it’s like “ohhhh I get it now”, it all comes together.

And that really helps my production. I start all my songs from the bass line. It gives me like a ground to stand on. I spend a lot of time trying to make really good bass lines. It’s what makes people dance, it hold the song together. If you have a grooving bass line you can you can sing about really sad stuff and it doesn’t matter you’re not weighing people down and thats really important to me.

I remember the first time I did a cover of “Hey, Yeah” on the guitar when I slowed it down I was like wow this song is really deep but people are dancing to it. I think it’s a really cool thing to put something in the air that people can think on and affect them on an emotional level but also they can dance to it. I don’t want to put music out that will make peoples heart feel heavy. There is a time and a place, but that’s not for me.

Learning about bass in Atlanta was really important to me because it gave me a way to be hella emotional like I am but still turn it up. 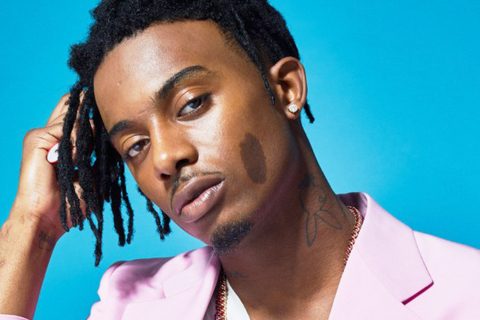 Playboi Carti is heading down under this March!