Mark Farina Kicked Off The Decks At ‘House’ Event

DJ Mark Farina has been kicked off the decks at the Vegas Marquee nightclub after being booked for a ‘house’ specific event with Miguel Migs.

The popular club and pool spot had advertised the day as an ‘authentic house experience’ with the West Coast favourites, although after only a short time into his set was kicked due to the club manager “getting complaints from their table service crowd.” – Mark was replaced by another DJ who jumped into more popular and commercial house. 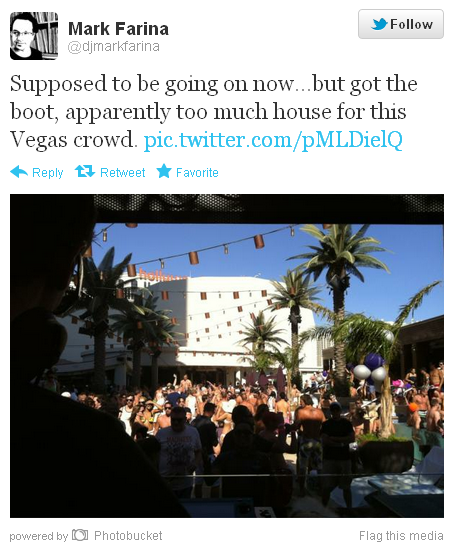 Even stranger is that Mark is set to play at the same venue this Thursday?

Table service and Cabanas at the Vegas clubs are becoming more often then not the #1 revenue channel with thousands being spent each and every weekend.

This follows a similar if not exact scenario where Dennis Ferrer was booted from the stage back in February!