You can stop holding your breathe maybe, French electronic magazine Tsugi have revealed in their lastest issue the supposed name of the first song off the new yet to be released Daft Punk album – “Renoma Street”.

When a fan pressed for more information from the magazines editor on twitter he responded back with the date ’21/7′.

Rabid fans on Daftclub.com (Daft Punk’s number 1 fan site) have figured the name of the song is said to be in a popular cafe in Paris, hometown to the French producers.

Becareful though, it’s not to be confused with the fake snippet a French producer uploaded to Soundcloud earlier this month.

Further still, adding fire to the rumours Chic’s Nile Rogers along with Mark Ronson will be hosting the ‘Montreux Dance Party’ for the annual jazz festival with some unannounced ‘very special DJs’ mid-way through July.

With Nile Rogers, Paul Williams, and Giorgio Moroder already in the studio with the French duo, could this be the album we have all been expecting or a new sound all together?

Update: a scan from the Tsugi magazine shows that the track ‘Renoma Street’ might actually be apart of a compilation in the next issue 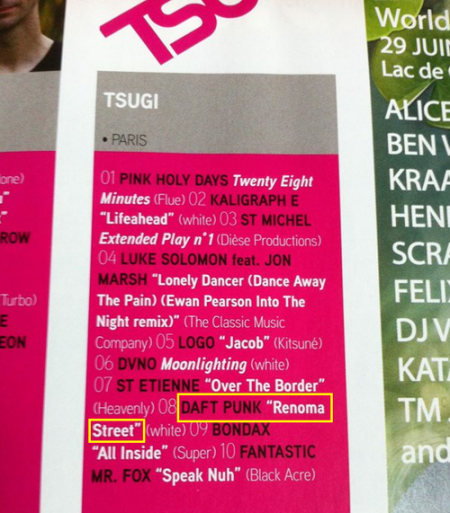 Update update: Pitchfork ‘confirmed’ this morning that the rumours are false although without any serious sourcing? We’re still hopeful.